In line with the rise in the standard of living, the potato has lost some its importance as a staple. It is now mainly viewed as an accompaniment and so has to compete with other vegetables that are available throughout the year. However, the development of industrial pre-preparation has helped to slow the decrease in consumption. In order to compete successfully and satisfy the demands of more discerning consumers, potato retailers must focus on its nutritional value, good presentation and great versatility. Bearing this in mind, CAMPOTEC S.A. planted potatoes in 160 hectares of land in the Ribatejo in 2009 and launched the CHÈRIE variety. This is a different, flavoursome potato with an elongated, smooth shape and red skin.

We currently produce 45% white-skinned potato varieties and 55% red-skinned. As the quantities of potatoes we process are much larger than our production capacity and because of the seasonality of potato culture, we have to import from France and Spain during the months when there are no local crops. 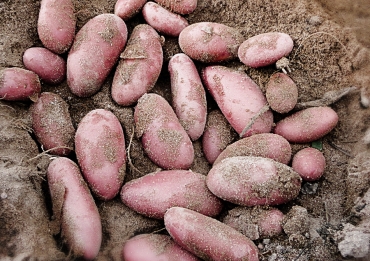